The title is cheesy and doesn’t make much sense, but cheese is awesome and we have painted the door! (With chalkboard paint in a blue color, get it?)

We were trying to figure out the measurements (which literally means I sat, eyes glazed over, as Tuvia figured them out) and realized we wanted a three inch border around the sides. Genius hubs realized we had painter’s tape just that measurement! 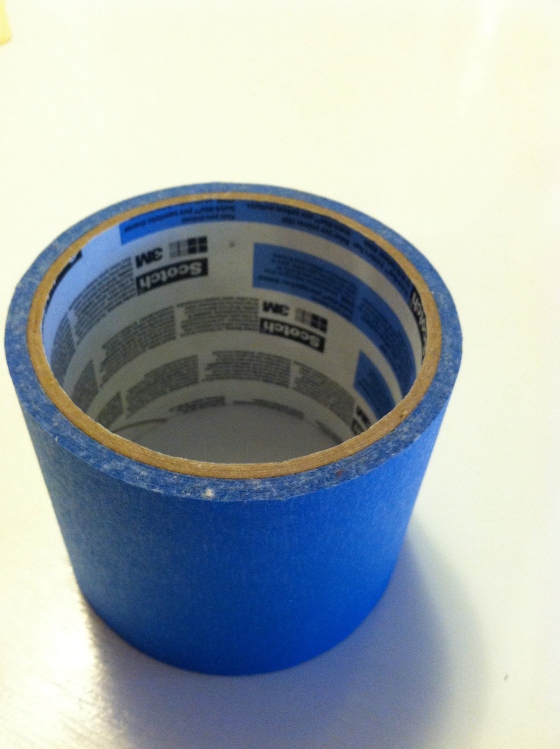 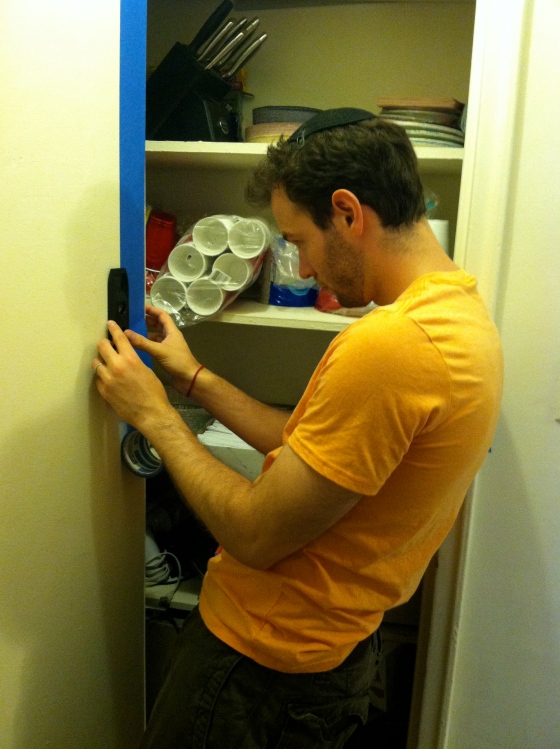 This is the door with the outside border. We were going back and forth between doing one large rectangle or three smaller ones (which we are pretending are squares) and we decided we would map it out with the tape and see what we thought. 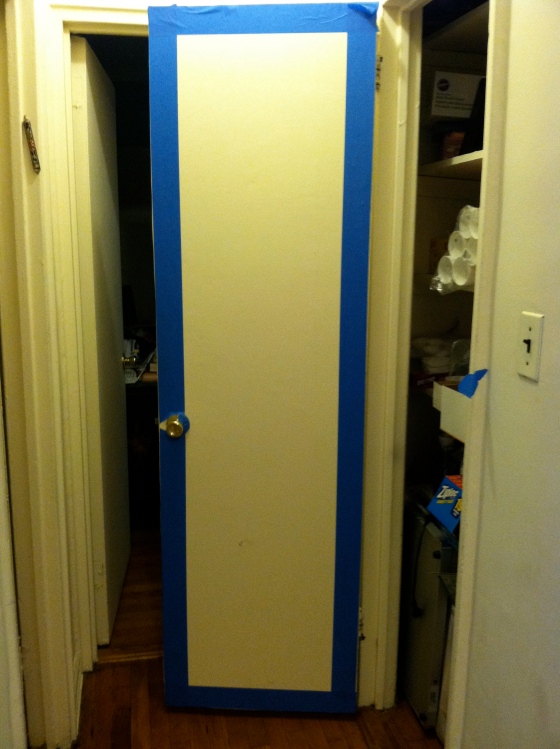 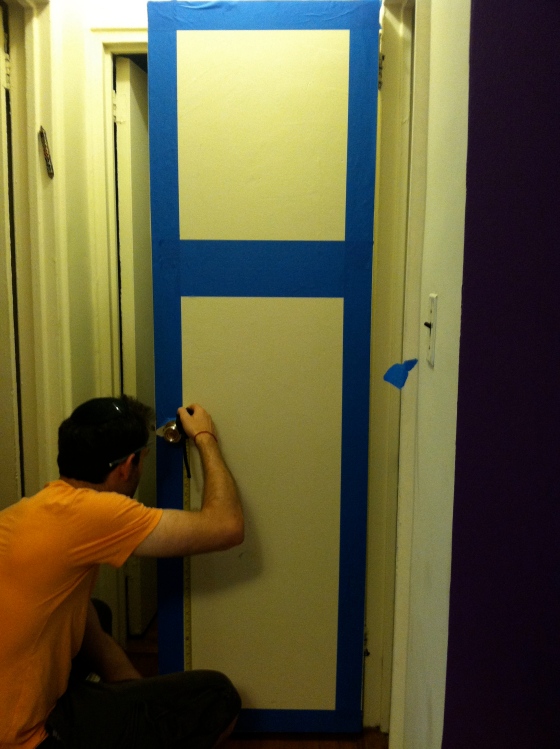 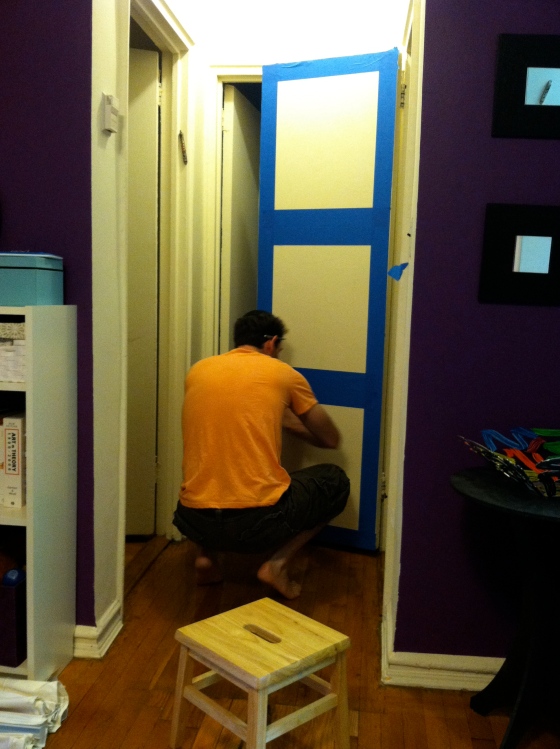 After Tuv finished the borders, we decided we liked the idea of three better. It has more visual interest and we like the thought of there being a different function for each. Although to be honest, we all know the middle and bottom are going to be Aiden’s to do what he likes with until next month when he will undoubtedly be able to reach the top one. 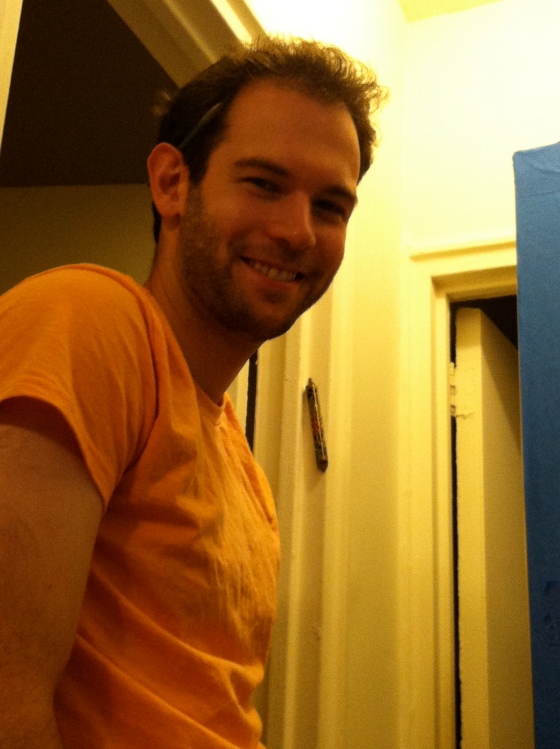 Obliging me with a picture of his face because I think he’s cute. This is clearly a “I’ll indulge you and get this over with” shot.

Then it was my turn. Tuv went to Home Depot to get things for other projects we’ve been lagging on and I painted the first coat. The first thing I noticed was that there were bubbles in the paint. 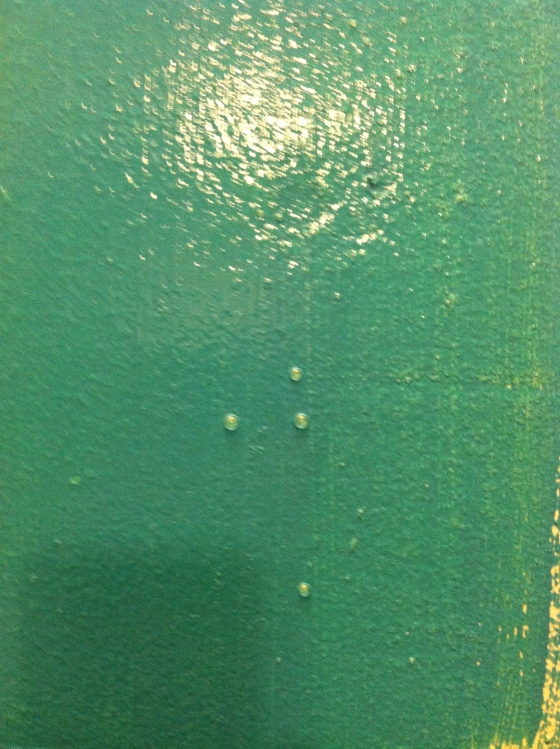 A quick search online informed me that it could be due to: mixing the paint quickly (yup, did that), painting too quickly (definitely guilty) or because of painting on a porous surface without properly preparing it first (mmmm maybe). I discovered that brushing over it a few times got rid of the bubbles so I wasn’t too worried.

After the first layer, which we used as primer, it looked nice but definitely needed another coat. The picture does NOT do it justice, but I was too busy (fine, lazy) to go get the real camera and my iphone is so handy…literally it was in my hand post phone call from Tuv. 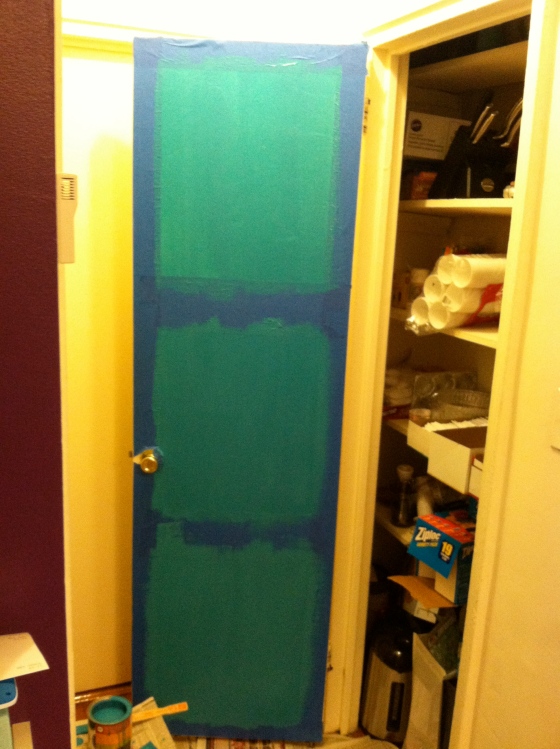 While the first coat was drying (it’s recommended that you leave it for 3 hours), I decided to prime and paint the spice racks. There’s only one hour wait time between those coats so I figured it was a good use of time. 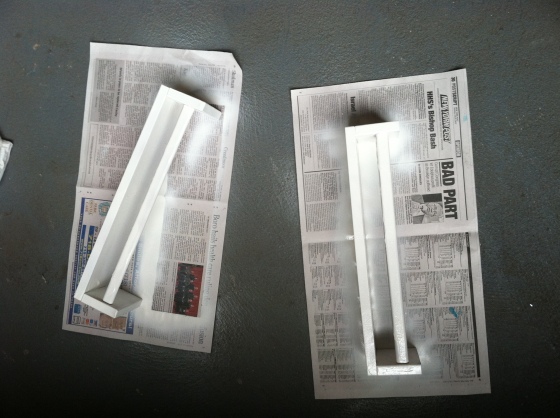 We had primer and white glossy paint left over from our dining room table redo so that was easy enough. 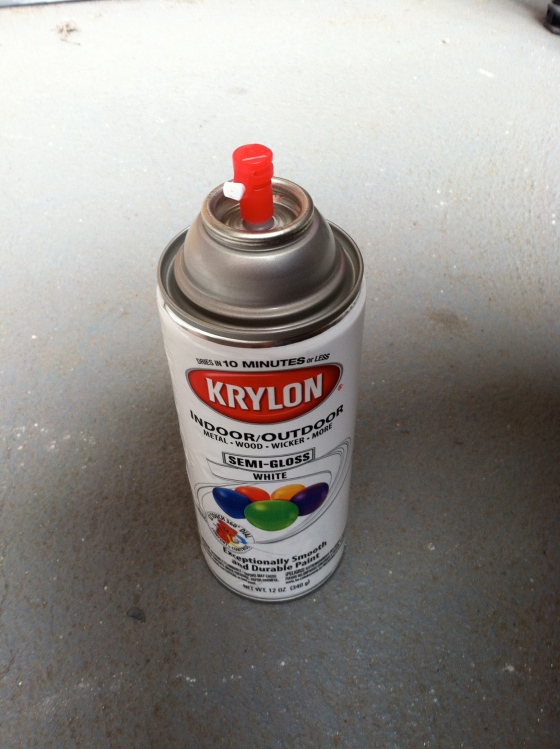 I read on Young House Love that you should peel off the painter’s tape right away to avoid peeling dried paint and creating uneven borders. Well….here’s what it looked like: 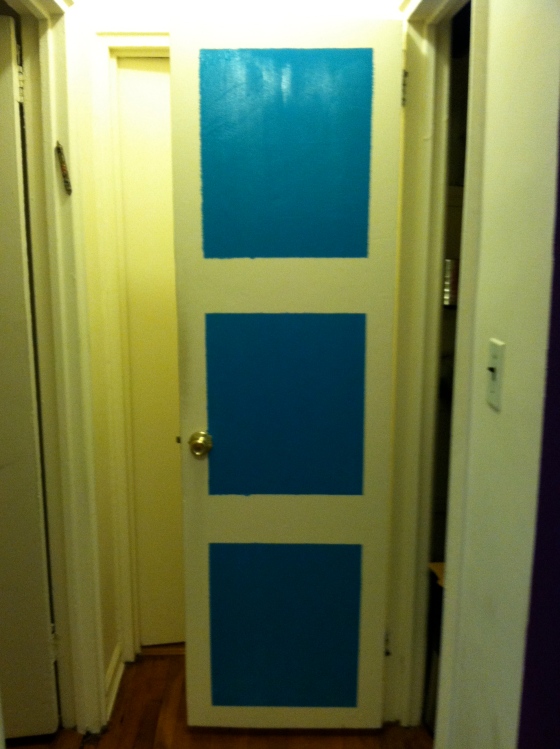 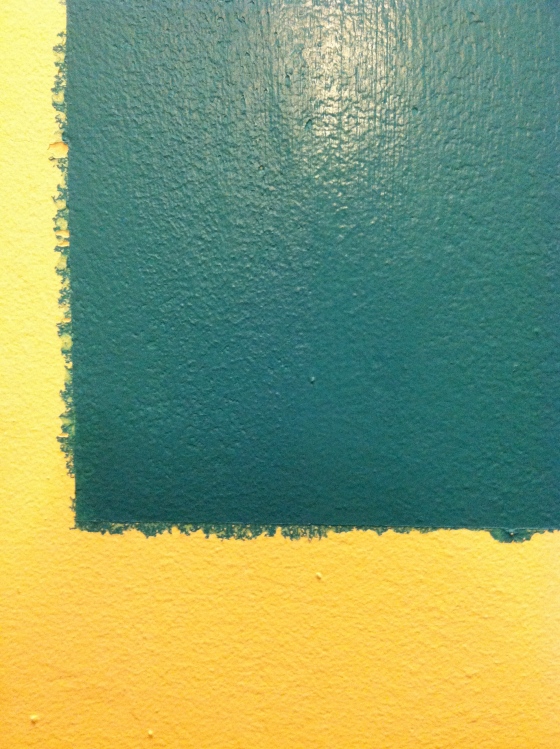 As you can see, the borders are completely ragged! I should have done my YHL research more thoroughly! A previous post says:

“ladies and gentlemen we can definitively proclaim that we saw a sincere and amazing difference between blue painter’s tape and Frog Tape. It really does create a much crisper edge with zero bleeding or stippling.”

So we’re gonna pretend that we did that on purpose (you all with me on this?) and then Tuvia added the spice racks. I didn’t get a shot of the whole thing before Aiden discovered it, but the good news is: he LOVES it!

Now excuse me while I get photo happy with my boys (I have a problem, but if they weren’t so charming it probably wouldn’t be this bad so it’s totally their fault.) 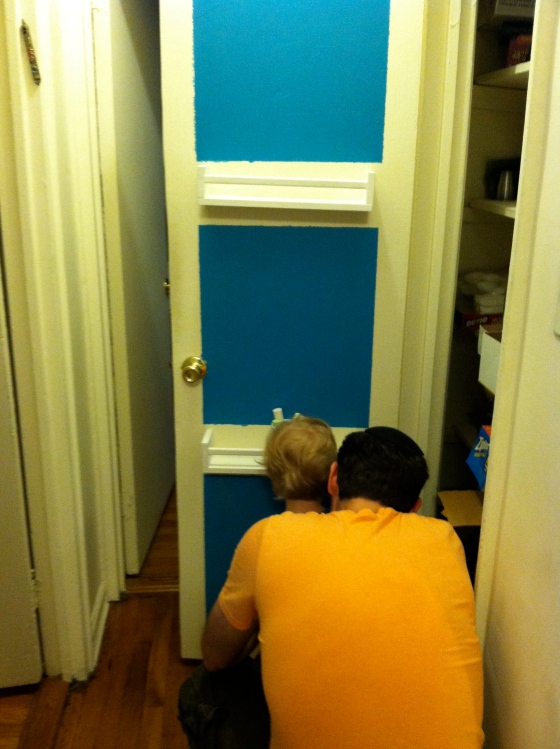 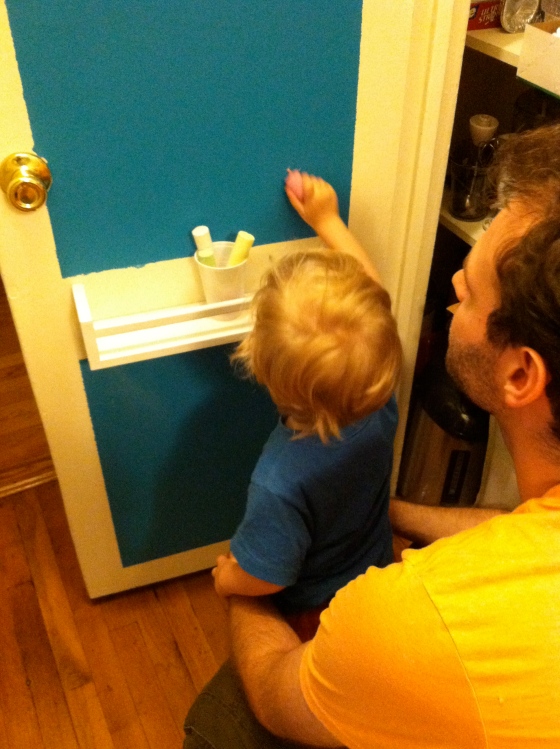 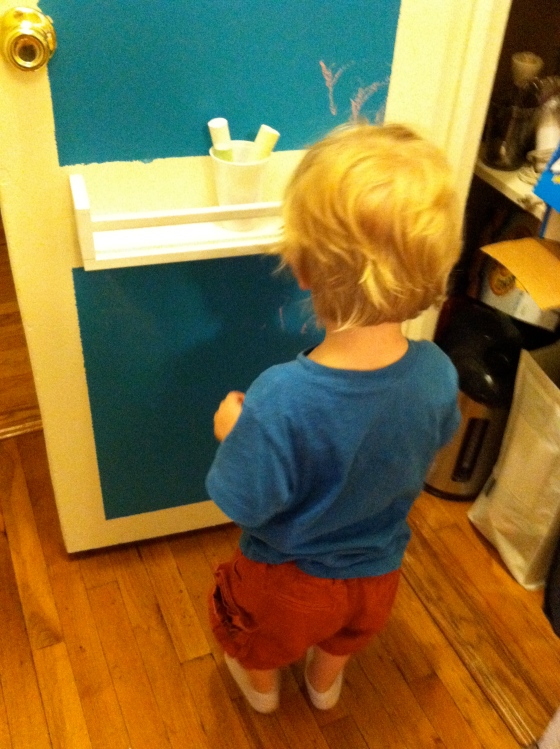 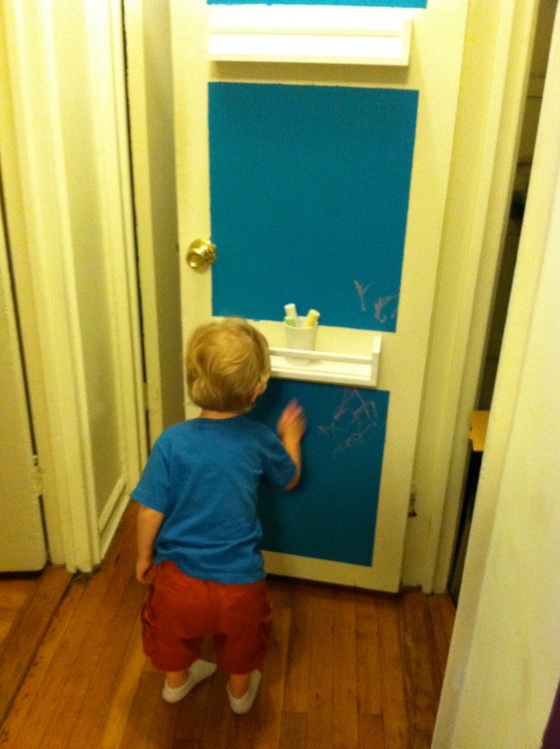 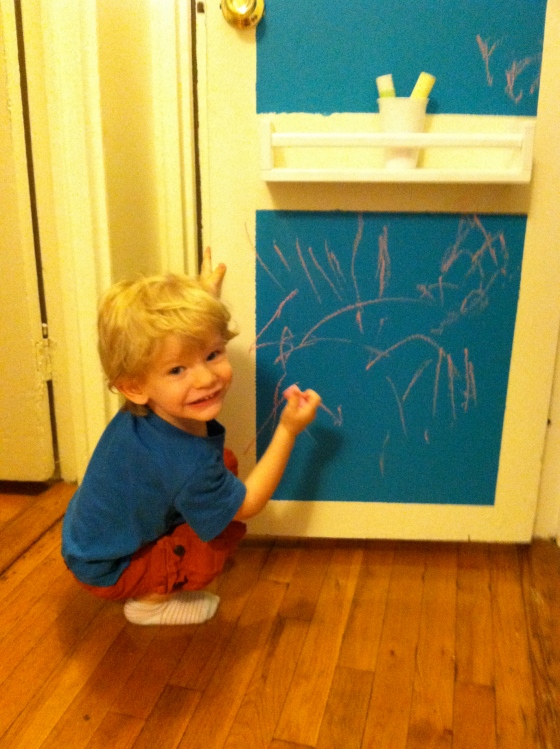 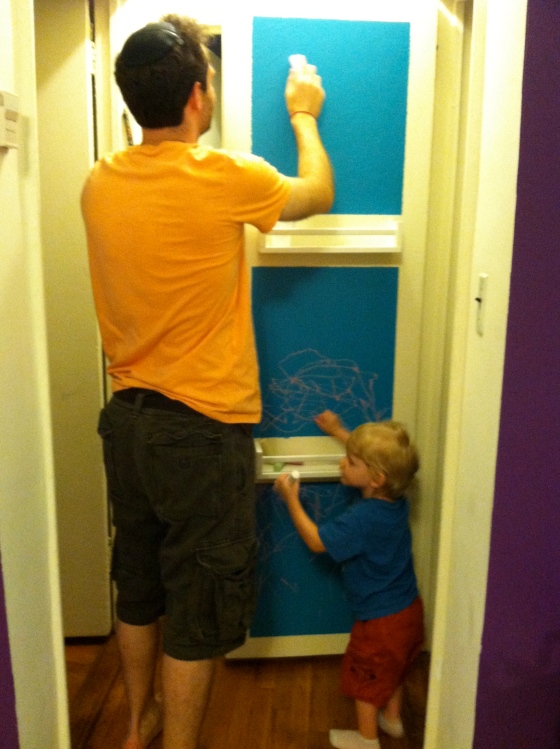 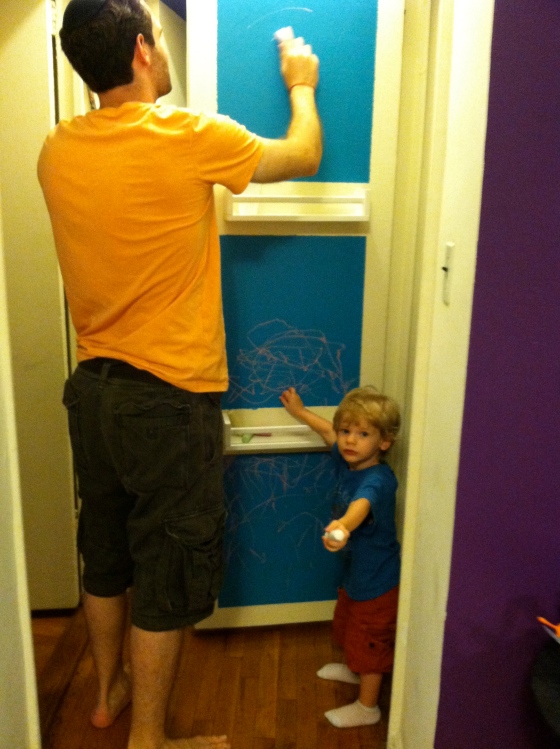 Aiden likes it when everyone participates “Mommy, you wanna draw?” 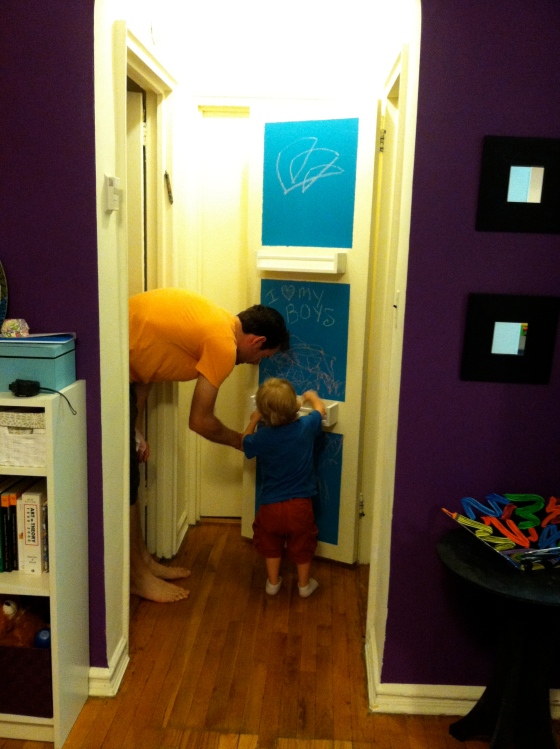 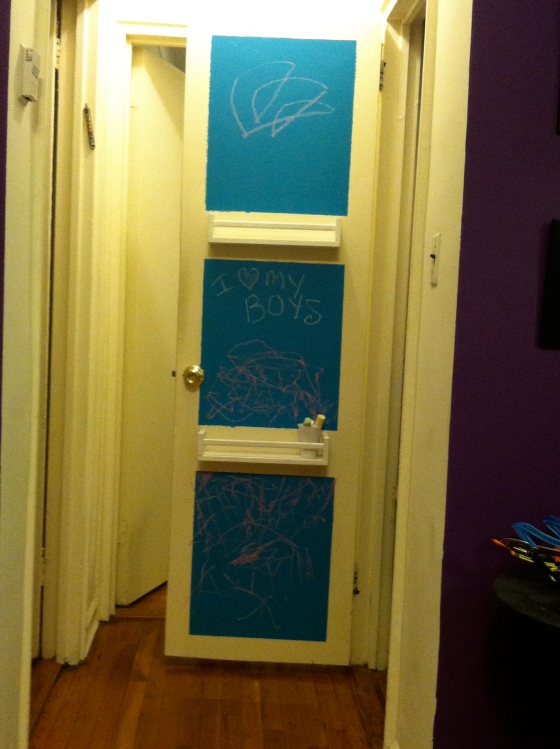 The finished product with all original artwork

So there you have it! Our chalkboards and racks for menus/notes/chalk/eraser/whatever we decide.

Have you ever repurposed the back of a door? What did you do with it?

5 thoughts on “Chalk it up to Blue”

Hello!
I'm Gilit Cooper, lover of all things interior design, organization, and a total sucker for a good DIY project. Shoes Off, Please is my blog about the journey to maximize our apartment in practicality and prettiness within a budget. I hope you enjoy! 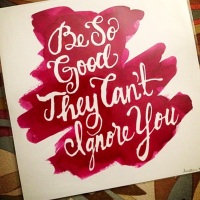 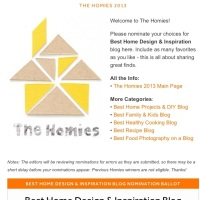 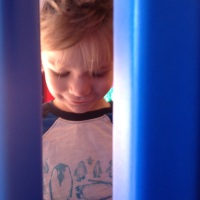 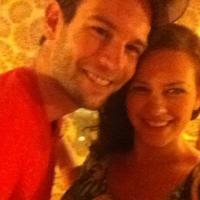